Matt Tomerlin’s pirate novels immerse readers in a violent Golden Age of Piracy where fictional characters meet legendary pirates such as “Calico Jack” Rackham, Benjamin Hornigold, Charles Vane, and the infamous Edward “Blackbeard” Teach. The adventure begins when Captain Jonathan Griffith kidnaps Katherine Lindsay, who will one day become the ruthless Kate Warlowe, captain of the Scarlet Devil and bane of the Caribbean. Tomerlin takes readers through the minds of several pirate characters, alternating between POV chapters, from the virtuous to the truly evil. Pirate lovers will find no shortage of treachery, cutlass duels, ship-to-ship battles, buried treasure and much, much more.

“Game of Thrones on the high seas!” 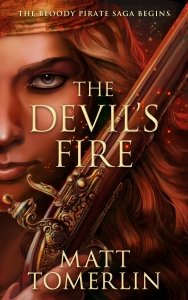 Katherine Lindsay, the pampered young wife of a wealthy ship captain, has left her leisurely life in London to accompany her husband to America. So far their journey has been uneventful, even boring. But when pirates suddenly storm the ship to plunder her husband’s riches, Katherine is one of the treasures they steal, sparking a bloody chain of events that will alter the course of piracy in the Caribbean forever.

“Tomerlin has delivered one of the best pirate tales around, deserving to occupy the lofty shelf beside such classics as Treasure Island, Crichton’s Pirate Latitudes, and Powers’ On Stranger Tides.” 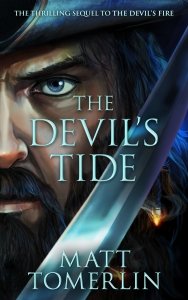 Hostage-turned-pirate Kate Lindsay returns in this action-packed followup to The Devil’s Fire, and the last thing she wants is to go back to her mundane life in London. A young pirate narrowly avoids the gallows when the governor of the Bahamas enlists his aid in bringing Lindsay to justice. A pirate hunter returns to his old ways, with the demons of his past swiftly following his trail. A beautiful strumpet falls in league with Blackbeard, witnessing his despicable crimes firsthand, before she becomes a pawn in his schemes. As all sides spiral toward a fiery climax, nothing is what it seems, and the odds are in favor of death.

“A rich prize and a nautical Game of Thrones.” 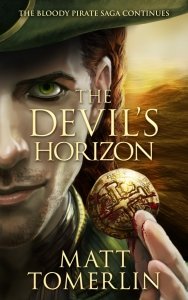 The Golden Age of Piracy is drawing to a close. Captain Guy Dillahunt recklessly pursues the infamous Charles Vane across the Caribbean, risking the lives of his entire crew for one last chance at glory. Former strumpet Jacqueline Calloway uncovers a dark destiny she never could have imagined. The dashing Gabe Jenkins attempts to right the wrongs of his past, and meets an enemy he does not expect. Kate Lindsay engages in a final battle for her freedom, while friend and foe alike conspire against her. The horizon beckons, but few will survive to reach it. 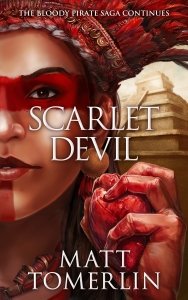 As agents of the Crown hunt the last pirates of the Caribbean toward extinction, Captain Kate Warlowe and the treacherous crew of the Scarlet Devil search for an uncharted island where a fabled lost city supposedly yields limitless fortune. What they find is far more terrifying than a walk to the gallows. The haunted people of an ancient civilization linger in the shadows, led by a mysterious man with a forgotten destiny. Separated from her crew and fighting for her sanity in a place where nothing makes sense, the intrepid Captain Warlowe must keep her wits if she is going to survive the dangers lurking around every corner. 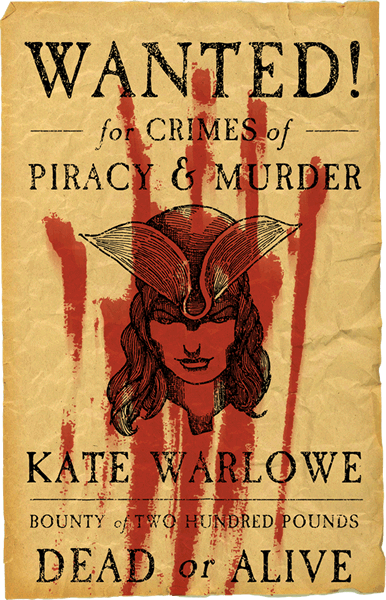 “Pirate novels are too often accompanied by a goofy hero/heroine who outruns grotesque zombies, translucent ghosts, singing mermaids, and/or monstrous krakens. I wanted to write a story that took pirates seriously and portrayed them as realistically as possible, while still spinning an entertaining yarn. I spent the better portion of a year studying piracy, ships, and the era in which the story would take place. I needed this world to feel as authentic as possible, so its outlandish events would be easier to swallow. These pirates are not caricatures. They are sailors who rebelled against ruthless captains, young men who rebelled against strict fathers, and slaves who seized their one chance for freedom.

I quickly decided on a female protagonist, as I intended to portray the pirates from the view of an innocent who had the most to fear from them. The evolution of Katherine Lindsay, who begins as a delicate woman from London taken hostage by Captain Jonathan Griffith, is the true heart of the first novel in what would become (unbeknownst to me when I released it) an epic saga. While the chapters alternate through several other characters, their actions generally revolve around Lindsay. She is the wrench that grinds Harbinger‘s gears to a halt, the wooden slipper that sabotages a perfectly oiled machine. I had not initially intended to end the book as it ends. Katherine Lindsay took on a mind of her own, and I must admit that even I lost control of her.” 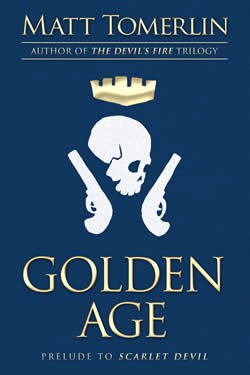 Read Matt Tomerlin’s short story, GOLDEN AGE, which takes place during THE DEVIL’S FIRE and foreshadows the events of the fourth book, SCARLET DEVIL. Governor Woodes Rogers arrives in Nassau, determined to rid the Caribbean of its pirate populace. Jack Rackham, Anne Bonny, and Charles Vane have other plans.

READ IT FREE
Scroll to top